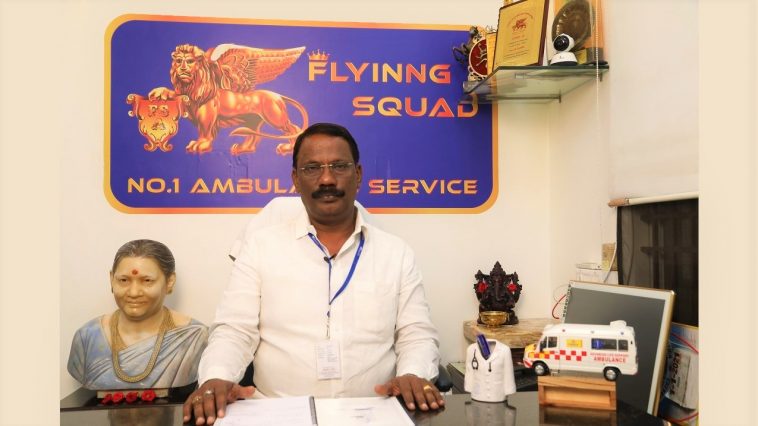 At that time, his Father converted his Taxi for Mortuary purposes, and it was given to him to carry onto this field at the age of 19.

Initially, the services included transferring dead bodies in Taxi and later on, the company, Flyinng Squad Ambulance Service, was established in 1981.

He invented the Dead Body Freezer Box and launched it in Chennai in 1996 to preserve the deceased at home to conduct the religious rituals for the funeral ceremony. It has created a revolution ever since. So much so that it’s now founded even in the remote villages of India.

“We feel proud that over 20 Million People in India have involved in this Business… their livelihood by either in the Manufacturing of Freezer Box or… rental service during the event of death in their locality.”

The Concept & Encouragement Behind

The Leading and Reputed Private Ambulance Service Provider of Chennai, Flyinng Squad Ambulance Service, has served an average of 30 Patients daily. The invention of the Dead Body Freezer Box is a revolutionary concept to preserve the deceased at home for Funeral ceremonies. It is an unnoticed invention but is being used all over India for its purpose.

According to Dr. Kumar, they are very pleased that their concept of preserving the deceased has a greater advantage over the traditional method used before. This concept of the Dead Body Freezer Box remains the same for almost 25 years now.

“We introduced a fully equipped Mobile ICU Ambulance with emergency medical aid and equipment in the year 2000 when there was only oxygen support available within the Ambulance and set as an example for the Private Ambulance Companies.”

The Special Funeral Van is in the concept of providing a dignified farewell to the dead, has proved as a good gesture particularly in these pandemic times where there is lots of confusion and disturbance in performing the funeral rites for the covid victims. Funeral Coaches provided by Flyinng Squad Ambulance Service are covered by Glass helps people to see the deceased from the recommended distance.

Nonetheless, all this has been possible for his Father, Mr. S. Mogan Naidu. He was the first to introduce this concept to him by lending him his taxi, and since then, Mr. Kumar is forever indebted to his father’s efforts.

As he is the originator of something that is being used by almost every ambulance company, the career highlights of his life are uncountable. Nevertheless, here are a few that he’s incredibly proud of:

Apart from these, Flyinng Squad Ambulance Service has provided service to the VIP quota of national personalities. Some of them have been:

The list only goes on. As the company has been serving the mankind for over 25 years, many highlights and recognition he has achieved over these years. Moreover, Flyinng Squad Ambulance Service provides mortuary services and every other service that mandates an ambulance. Such as free Service to unclaimed bodies, free service to Polio eradication camps, free service to blood donation camps, and social events.

With every patient comes a new experience, a new requirement. Therefore, interaction with many people has given his team dignity and sometimes harsh behavior. However, the real challenge has been handling the team of Ambulance Professionals, training the teams to handle Patients, Customer Service, Counseling to handle critical situations, training to handle special cases like VIP Patients, VIP Deaths, etc.

Yet, the constant effort to update their work and look for opportunities around them, going Digital, etc., has made them create a market for the services. Looking at the bright side today, the company has recently launched Premium Funeral Coaches, which has slowly started getting popular among the people.